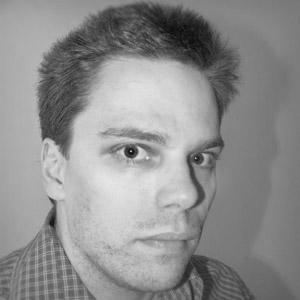 The triumphant return of Surly Questions! When JM Bell isn’t writing hyper-articulate comments on Google+ or blogs, he blogs at Start Your Novel, a rich resource for writing tips and inspiration. He was kind enough to take the time to answer some questions — thanks, JM!

At the age of 11 I discovered metaphor and started writing poetry. I wrote poems for more than a decade — a few of them I turned into song lyrics, as I fronted three bands for about seven years. At one point it became clear to me that I wasn’t much of a poet, but writing was pretty much a part of my identity, so I started experimenting with short stories. All of them are trunk stories, deliberately weird and unpublishable. That’s OK, though, they were practice.

When I was little I’d see writers on TV or hear them talk on the radio, and oh, what superb creatures they appeared to be. Learned and old and sage. Who’s that man?, I’d ask my grandmother. That gentleman’s a writer, she’d say. (She was a rich man’s daughter, my grandma. Brought up to be a lady and little else. She gave piano lessons for a living.) And I’d go ooh and ahh with my little mouth.

So I can’t tell you when I realized what I wanted, or whether I made a conscious decision. I started writing before I knew what I was doing.

Why did you start startyournovel.com?

All these ideas were floating in my head and I didn’t know what to do with them. Couldn’t turn them all into stories. I knew I wanted to blog, but had trouble finding a topic and then it hit me — I should take advantage of my story ideas. They were my unique value proposition, if you’ll pardon my using a marketing term. I was disappointed with most of the writing prompts out there and decided to do something different.

Have you, in fact, started your novel?

Two, rather. The first survived two exploratory drafts and a complete reimagining in terms of genre, but I let it go after I realized it was about an unsolved issue in my life. The second, well, my protagonist was basically Red Sonja in an imaginary Southeast Asia. All of the other characters found her very exotic, and I had a couple of viable antagonists but no plot.

Right now I’m looking into material for a new project – just gathering stuff, really. Not much I can say about it except that I’m going to avoid old mistakes and make new ones. Probably.

Has your translation work informed your writing in any way?

Definitely. When I started out 10 years ago, I had no idea of the challenges some business and legal documents would pose. And I’m not just talking about research — many people in banking and public administration draft memos, reports or articles for the in-house magazine because they’re saddled with the task, not because they enjoy writing.

I’ve had to handle stuff that defies understanding, which is great practice for a writer: turning convoluted syntax into something that flows. Language for actual humans, you know? And you learn to be less poetic. One of the reasons I could never make it page 10 of Something Wicked This Way Comes is that the imagery is so profuse and over the top, you lose sight of the story. Too many similes ruin your macaroni.

You pick up a thing or two when you translate internal surveys for large companies. You get a glimpse into the workings of rather complex organizations without actually being there under the same kind of pressure as the employees. When you translate employee feedback for company bosses, that’s when you get to grips with the disconnect between truth and propaganda. There’s a number of corporations out there that would like to become their employees’ new religion.

And there I am as an outside observer and enabler, because I’m helping to convey these corporate gospels, as it were. But the fact is I get this kind of work through agencies, I don’t specifically go out and ask for it. Doing work that is sometimes at odds with my values has made me understand that survival is a complicated game. Lots of gray areas.

What about your photography?

Writing has informed my photography, not the other way around. …I think. What I believe is that all successful photos are narrative. The most enduring ones all tell stories and evoke artistic tradition. Just look at the work Sebastiao Salgado did with children in refugee camps. Those apparently simple portraits have a depth to them, a crushing surfeit of emotion. You don’t have to know much about the children, you will feel moved anyway, because each portrait is a thing of wonder.

Good photography is visual literature, and good literature is photography-in-writing. Writing and photography aren’t so different after all. I like surreal imagery and people-free landscapes, which is why so many of my stabs at fiction have started with weirdos living in the middle of nowhere.

You like to inspire others… do you have any stories about inspiring someone?

Once I met this guy in a bar who’d seen my band play live when he was 14 and apparently we blew him away. He decided to grow his hair long there and then, and start a metal band of his own. Now, the guy told me this at the age of 26 and he still remembered me.

You regularly post features on “what can [X] teach you about writing”… what one  character or author has taught you the most about writing?

No, I’m kidding. Getting to grips with Samuel Beckett ripped my eyes open. His work illustrates all too well the rewards and pitfalls of postmodernism. In terms of sheer daring it would have to be W.S. Burroughs, however. Burroughs managed to shock Beckett at a dinner party when he explained his cut-up technique. Suppose I take your Molloy and a pair of scissors, said Burroughs, and then I cut up the pages into tiny bits, I cut through the pages until I get the text to say what I want it to. Samuel Beckett was flabbergasted.

Beckett, though — respect to the man who can start a novel with

The sun shone, having no alternative, on the nothing new.

Philip K. Dick, Gene Wolfe, Kurt Vonnegut and Ursula LeGuin are definitely influences. Dick knows how to portray people on the verge of total collapse — people about to lose everything, including their sense of self. People dumped into a world that isn’t even cruel but just cruelly absurd. PKD more or less converted to Valentinian Gnosticism late in life, so he deploys his characters in worlds that are ambiguous and deceptive for a reason. Dick taught me to write from a position of doubt.

Now, LeGuin, she writes beautiful human beings and her universe is more or less optimistic. She’s a genius when it comes to introspection; she takes you where the character is at her most honest and vulnerable and you want to keep reading to learn more. I don’t know how else to explain this, but with certain authors, you start to read their books and you feel at home inside the story. That’s what my favorite authors taught me and teach me still, that you should make the reader feel at home.

What has been the most rewarding thing about connecting with other writers through  social media?

The feeling that we’re an ecosystem. Things are a lot more competitive among photographers, believe you me.

A conversation that starts about Freud turns into a discussion of beards.

What’s not to like? It’s been a wonderful experience so far. My only regret is not starting the blog sooner.

“Receive” may not be the most fitting verb in this case. Ezra Pound says that, if you want to write a novel, you should read one that you admire. Of course Pound meant you should study it and dissect it every which way. He was the kind of writer that doesn’t make concessions and one hell of an editor. There’s a facsimile edition of his work on Eliot’s poem, The Wasteland, and you see the guy wasn’t playing around. He went at it hammer and tongs and turned The Wasteland into a memorable poem. But I digress.

I couldn’t go without mentioning James Scott Bell’s Plot and Structure. It was the second book on craft I picked up and it helped me identify several weaknesses in my writing. There’s a good tip in there: “Maintain the tension in the story up to the last possible moment.”

Are there any exciting projects in your future?

Right now I feel I should hop on a plane, go to Switzerland and check out the Giger museum. No, it’s not a writing project, but something I owe myself, having admired Giger’s work for years.

In no particular order: The Collected Poems of Hart Crane, The Bodhicaryavatara by Santideva, Carroll’s Through the Looking Glass, some Wordsworth, some Emily Dickinson. If I could add a sixth, it’d be John Donne’s sonnets. A seventh? Kafka’s short stories.