Today I’m happy to bring you an interview with Emmie Mears, former fellow Missoulian, outspoken feminist, overall badass, and an author I think we’ll be seeing a lot more of in the future. Emmie just released her first book, and was kind enough to answer some questions about her process, her writing trials, and what it’s like to suddenly become a Big Five author. And when you’re done reading, you can pick up a copy for a song. See what I did there? Thanks, Emmie! 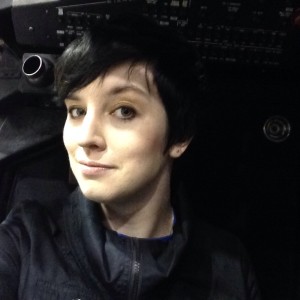 I always just sort of was. I wrote constantly as a kid. Journaled every day, started novels all the time — it never really occurred to me though that that was a career I could have until university though. We were really poor, and for whatever reason, I never made the connection that my favorite authors spun my favorite worlds for a living.

What, for you, is the hardest part about being a writer?

Right now it’s juggling a day job and deadlines. I work long hours and when I come home I’m physically and mentally exhausted to the point where I just want to eat gelato out of the pint and watch Buffy or Supernatural over from the beginning (again). I’m at a stage where I’m trying to find a schedule that works for me in the midst of a lot of upheaval and life change, and I’ve had varying degrees of success with that. It’s kind of a work in progress.

Tell us about THE MASKED SONGBIRD.

THE MASKED SONGBIRD, at its core, is a story about how strength is not something you’re born with: it’s something you build. I wanted to write a deeply flawed hero who really wasn’t a hero at the beginning, but show that qualities she always possessed (compassion and determination) can be molded into true heroism.

What books or media inspired THE MASKED SONGBIRD?

We pitched it as Bridget Jones meets Spider-Man, and that about covers that. Gwen’s a mess, like Bridget. She’s also picked on, like Peter Parker. Ultimately I wanted her to find her value in herself.

I don’t think I have one at this point. When I’m in the throes of writerly big bang, I’ll wake up, putter around the internet for a while, usually write a few thousand words, and then fizzle back into an internet slug.

How do you juggle the challenges of daily life and writing?

Right now…I don’t. I’m trying really hard to get used to a new home, a new life situation, deadlines, a day job, a commute that grew by about 300%, and myriad other things. As chaotic as it’s been, it’s really the start of something positive, I think.

That’s a tough one. I almost feel like they’re never done. Even with THE MASKED SONGBIRD hitting shelves, I still feel like it’s not done. It’s an odd feeling, but maybe that’s just the nature of a creative profession: our styles evolve, our voice can change, and publishing often moves so slowly that when something comes out, you wrote it two years ago and are a different writer come pub day.

Eventually, though, if you want anyone to ever see them, you DO have to be able to let go.

Oh, man. I met one of my best friends through WordPress, Kristin McFarland. Three years ago I was just starting out my little author blog and we became friends, but it wasn’t until that winter when my cousin very suddenly and tragically passed away that we became close. She emailed me because she’d experienced a similar loss and understood. Since then we’ve talked almost every day, and she flew out here last October for Capclave. I think it’s safe to say that I wouldn’t be the writer I am without the wonderful, zany, exciting, driven people I’ve been able to connect with on social media. Including you, O Esteemed Host of Mine. 🙂

It seems like you unexpectedly went from just another querying writer to Big Five author. Want to tell us a little bit about that journey?

Yeah, that was weird. LOL. When I finished THE MASKED SONGBIRD, I knew it was going to be a hard sell. Superheroes are tough. Urban fantasy right now is tough. The timeline was tough. It was just sort of stacked against me and my little book. I got so fortunate. My fabulous agent, Jessica Negrón from Talcott-Notch, was an assistant at the time I sent her boss my book. She plucked it out of the slushpile and LOVED it…a few weeks later, I had an R&R from Gina and was getting personalized rejections across the board from agents who loved it, but didn’t think they could sell it.

When Jes got promoted to agent in January of 2013, she begged Gina to be allowed to take me on, and Gina gave her blessing. I became Jes’s first client. We got a lot of requests from editors for the book, but the timeline and content made it tough. It made it to acquisitions two or three times at Big Five publishers, but ultimately garnered passes because the content and timeline were seen as a little too risky. That’s where we got super fortunate again — Mary-Theresa Hussey at Harlequin had the book and was getting ready to help launch Harlequin’s new e-imprint, Harlequin E. Their goal was to be able to publish books that didn’t quite fit into their other imprints, and it ended up being exactly what we needed. They’ve been fantastic, working with us on the timeline and busting butts to get THE MASKED SONGBIRD in reader hands before the referendum against which it’s set. I’ve been really blown away.

Then this spring, the announcement hit that Harper Collins had bought Harlequin, and I got a message from Jes one morning saying I was now a Harper Collins author. It was literally the first thing I saw when I grabbed my phone that morning, which probably didn’t help my ability to comprehend it. Ha. So that happened.

That might be more than “a little bit.” But it’s kind of a long story in general. 🙂

Many, many people. The writers I’m surrounded with on social media who keep at it day in and day out. People like Eve Ensler who take the pain of the world into themselves and still manage to give out kindness, empathy, and compassion instead of letting it hollow them out into poison and toxicity. People like Maya Angelou whose long lives were not long enough. People like Josh Groban for creating beautiful, moving art and at the same time enjoying absurdity and earthy humor. People like Misha Collins for finding the zany and joyful in the world and using it to offset sadness and poverty. Lots of people. 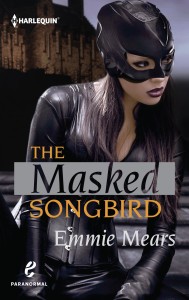 What’s next for you after THE MASKED SONGBIRD?

No, seriously. I need one. I’ll be working on the sequel to THE MASKED SONGBIRD this summer and then come my August deadline, probably hibernating for a few days.

Thanks so much for having me, Dan!

About THE MASKED SONGBIRD

Mildly hapless Edinburgh accountant Gwenllian Maule is surviving. She’s got a boyfriend, a rescued pet bird and a flatmate to share rent. Gwen’s biggest challenges: stretching her last twenty quid until payday and not antagonizing her terrifying boss.

Then Gwen mistakenly drinks a mysterious beverage that gives her heightened senses, accelerated healing powers and astonishing strength. All of which come in handy the night she rescues her activist neighbour from a beat-down by political thugs.

Now Gwen must figure out what else the serum has done to her body, who else is interested and how her boss is involved. Finally–and most mysteriously–she must uncover how this whole debacle is connected to the looming referendum on Scottish independence.

Gwen’s hunt for answers will test her superpowers and endanger her family, her friends–even her country.

Emmie Mears was born in Austin, Texas, where the Lone Star state promptly spat her out at the tender age of three months. After a childhood spent mostly in Alaska, Oregon, and Montana, she became a proper vagabond and spent most of her time at university devising ways to leave the country.

Except for an ill-fated space opera she attempted at age nine, most of Emmie’s childhood was spent reading books instead of writing them. Growing up she yearned to see girls in books doing awesome things, and struggled to find stories in her beloved fantasy genre that showed female heroes saving people and hunting things. Mid-way through high school, she decided the best way to see those stories was to write them herself. She now scribbles her way through the fantasy genre, most loving to pen stories about flawed characters and gritty situations lightened with the occasional quirky humor.

Emmie now lives in her eighth US state, still yearning for a return to Scotland. She inhabits a cozy domicile outside DC with two felines who think they’re lions and tigers.

You can order THE MASKED SONGBIRD here! Released in a box set, you get four great paranormal and urban fantasy books for less than $4!