I realized belatedly that maybe I should have picked a snappier, less self-centered title, like 10 Books On Writing You Must Read in Order to Not Be a Total Asshole, but, whatever, too late now.)

A friend recently asked for my favorite books on the craft of writing. I had originally intended to go through these volumes in detail, one at a time, but nothing else about this blog has gone how I intended, so here’s my short list. I’ll probably have more to say on each of them later. I’ve already talked about Zen in the Art of Writing in detail, so I won’t say more about it here (other than “buy and read it”).

In no particular order, then:

Homespun advice from one of the most commercially successful authors of all time, in the easy vernacular that made him so readable. You can’t really go wrong.

Writing Down the Bones (Natalie Goldberg)

I keep this book around when I want to feel inspired. Not a lot of technical advice, but cultivates passion and enthusiasm.

I don’t generally enjoy Card’s fiction, and to say I disagree with his politics would be a dire understatement — but this book is really good. If you can swallow giving the guy your money, pick up this volume. It’s still the best book on characters I’ve read.

Written in 1965 and still relevant, this book covers everything from structure and conflict to planning and characterization. It’s jam-packed with great advice.

The 38 Most Common Fiction Writing Mistakes (And How to Avoid Them) (Jack. M. Bickham)

A thin, concise, easy-to-read list of classic fiction gaffes. If you’re a beginning writer, you’ll probably find yourself guilty of more than one. Great bathroom reading.

The Art of War for Writers (James Scott Bell)

Wry, clever writing advice delivered in a fun new way: through the context of Sun Tzu. This thing is a treasure trove.

It’s a bit of a cliche to describe a book on writing as being written “from the trenches,” but Ariel Gore’s book reads like that. It’s full of hard-nosed advice and scruffy charm. Especially recommended for people thinking about getting into self-publishing. 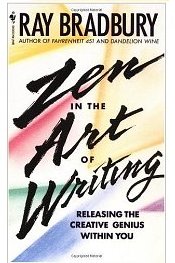 Whenever someone brings up the subject of Westerns (which is pretty much never), I tell them that my favorite three Westerns are Tombstone, The Outlaw Josey Wales, and Unforgiven. I love them not only for their inherent awesomeness, but because collectively, they cover all the Western narrative bases. Where Tombstone is a straightforward, rollicking adventure, Unforgiven offers a bleak, raw deconstruction of our assumptions about the traditional Western hero. I find Josey Wales occupies a nice space in between, rounding out the trinity with a balance of grit, verve, and snappy quotes about rock candy.

I have a similar trio of books on writing. My bookshelf fairly groans with books about writing. I love reading about craft. I love reading about how other writers work; their inspiration, their frustration, their process. Of all of these, three stand out as my personal trinity of essential works: Strunk and White’s Elements of Style, for its dry and unsympathetic mechanical advice; Natalie Goldberg’s Writing Down the Bones, for its mix of practical craft advice and fond sentiment; and Ray Bradbury’s Zen in the Art of Writing, for its infectious and totally unselfconscious passion.

Most writers, I suspect, have a handful of quotes or passages that sum up how they feel about their writing — something that inspires or haunts, possibly even mocks from time to time, like that obnoxious voice that wakes you up in the middle of the night after you’ve just killed twelve hours with a Two and a Half Men marathon and asks, hey, how that novel’s coming?

I have a heap of such passages, hoarded away in my consciousness like stacks of old newspapers in a shut-in’s hovel, but Bradbury’s words tend to haunt me like no other. His book opens with what I consider one of the most concise and cutting essays on a writer’s self-doubt ever written:

Sometimes I am stunned at my capacity as a nine-year-old, to understand my entrapment and escape it. How is it that the boy I was in October, 1929, could, because of the criticism of his fourth-grade schoolmates, tear up his Buck Rogers comic strips and a month later judge all of his friends idiots and rush back to collecting?

Where did that judgment and strength come from? What sort of process did I experience to enable me to say: I am as good as dead. Who is killing me? What do I suffer from? What’s the cure?…

Part of the answer, of course, is in the fact that I was so madly in love with Buck Rogers. I could not see my love, my hero, my life, destroyed… It was like having your best all-round greatest-loving-buddy, pal, center-of-life drown or get shotgun killed. Friends, so killed, cannot be saved from funerals. Buck Rogers, I realized, might know a second life, if I gave it to him. So I breathed in his mouth and lo! he sat up and talked and said, what?

Yell. Jump. Play. Outrun those sons of bitches. They’ll never live the way you live. Go do it.

Bradbury is talking about writing, of course, as much as he is Buck Rogers. Few writers make it through life without a generous helping of friends and family who are ready to inform them that they’re wasting their time. That no one reads, that writing doesn’t pay, that writing isn’t an honest trade or even a respectable hobby. If you’re really lucky, they might smugly quote Ghostbusters at you: “Print is dead.” Surely no one can argue with Egon, the fictional mad genius who once tried to drill a hole in his head, which would have worked if no one had stopped him.

Like Bradbury, we must judge these people idiots if we are to survive — or, to be a bit more charitable, acknowledge that they might mean well, but that their well-intentioned advice must be ruthlessly discarded as the insidious toxin it is. People can be smart, brilliant, and loving, and still give you advice that will lead you down a miserable path. To Bradbury, this was literally a matter of life and death, summed up succinctly in a single, unrelenting maxim: “You must stay drunk on writing so reality cannot destroy you… not to write, for many of us, is to die. “

There are many days when I envy Bradbury, not for his talent or his success, but for figuring this out so early in his life. Simply put, my own personal Buck Rogers lay dead for a long time; a withered corpse who would wheeze to brief life a few times a year, only to be felled by the first unkind word or gnawing self-doubt that floated my way. It took decades to gather the mojo necessary to rouse him back to vibrant life and keep him there. Some days he still teeters, like a marionette whose strings are half-cut, and I have to nurture him back to health with some quality time at the keyboard.

And that’s the thing, of course: Buck Rogers can’t make it on his own. Neglected too long, he’ll just wither away again, a harrowed revenant wandering the bleak hills until he drops dead unloved on some blasted Lovecraftian heath. When it comes to our creative selves, love is not enough. We have to keep them fed. Buck Rogers needs blood to survive.

Which brings me to the other Bradbury quote I like to keep close to my heart. It’s a short quote about the necessity of writing, frequently and regularly. Like so ideas in Zen in the Art of Writing, Bradbury frames it in a breathless imperative:

I have learned, on my journeys, that if I let a day go by without writing, I grow uneasy. Two days and I am in tremor. Three and I suspect lunacy. Four and I might as well be a hog, suffering the flux in a wallow. An hour’s writing is tonic. I’m on my feet, running in circles, and yelling for a clean pair of spats.

While I’m familiar with the delirium Bradbury describes here, I’ve become skilled at ignoring the madness that boils up when the writing urge goes unattended. It’s all too easy to let the insanity dwell there, like a buzzing mosquito in the back of my brain — constantly annoying, but too small to really hurt. There’s probably some sort of belabored, hoary metaphor about malaria I could make here, but I think I’ve done enough damage for one day. Fighting that laziness is vital to keeping Buck Rogers plodding along.

I’ll have a lot more to say about Zen in the Art of Writing in the future, I’m sure — his chapter on “How to Keep and Feed a Muse” is partially responsible for the name of this blog, after all — but that’s a story for another time. Suffice it to say, whenever it is a damp, drizzly November in my soul, I pick up Bradbury’s little white book and let his wild, unrestrained glee infect me like a joyous malady. Hard-nosed advice and stern essays on craft are all well and good, but sometimes you just need to remember why you love your shambling, undead Buck Rogers.