Hey, everybody. Today, I want to talk about my upcoming novel, Orison. I’m finally in a position where I have something to blog about. Namely, a completed draft in the hands of the editor. I didn’t see much point in talking about the process until I was certain I’d actually learned something along the way. Turns out I did. This is the first of what will be a series of posts on what I learned from my book.

I’m slightly apprehensive that what follows might be considered controversial, although I see no reason for it to be. It’s about my decisions about my own creative work, and what led me there. There is no chastisement or polemic intended, although if you choose to take it that way, I certainly can’t stop you.

That said, let me tell you about Randoval.

Randoval’s been with me for decades. He first appeared as a protagonist in my first and never-to-be-published space opera, Free Enterprise, a novel about a lovable but slightly bumbling thief who ends up involved in a sprawling galactic war when he steals a vital piece of military intelligence. Yes, it was a slightly warmed-over version of Star Wars, and this guy was a slightly warmed-over Han Solo. No two ways about it. He even had the brown hair and sarcastic demeanor. There was even a princess. And they hated each other and then fell in love. It’s embarrassing to think about now. What can I say, except I was around nineteen when I wrote it.

All the same, I liked Randoval. I have a real fondness for slightly hapless characters who get in more trouble than they can handle.  I found Randoval charming and rooted for him when he got in way over his head. Even though Free Enterprise turned out to be an unholy mess that I’d never inflict on an unsuspecting world, he as a character always stuck with me. He would crop up in other works of fiction, sometimes subtly (or not-so-subtly) renamed. My old friend Aaron Engler even played him in an RPG campaign I ran, because, you know, nerds.

So years later, when I penned the first draft of Orison, I decided to port Randoval over to a fantasy world and put him in the same situation: a common thief unwittingly steals something earth-shattering, and gets in way over his head. That draft was really only my second foray into a novel-length tale, and I aimed low, going for a wahoo, “medieval heist” adventure. On that level, I think I succeeded, and I think Randoval fit right into his assigned role.

Then there was a long interlude where I worked on some other things for awhile (read: years), then abandoned them, then came back to Orison. After a long period of agonizing, I decided I wanted Orison to be my first published novel — once it had undergone a serious overhaul.

In the midst of my rewrite, though, something began to feel wrong. Staid. Boring. Randoval as a protagonist just wasn’t doing it for me anymore. There was nothing wrong with him, he was still the same charming guy, but something had been sticking in my craw ever since I’d written it. I had exactly two female characters. One was little more than a sexualized cameo, and the other, to quote a good friend and reader, was “a bit of a tight leather corset.” And he was right. It was all white guys, doing white guy things, chasing other white guys around. The girls were mostly there to look hot, and occasionally kick ass, but mostly to look hot.

Now, is there anything inherently wrong with that? Not necessarily. But I didn’t like that my only female characters were basically love interests. That’s precisely the kind of thing I don’t like in the fiction I consume, so why was I writing it? I realized my fiction was pulling stunts I occasionally tended to razz other authors for: lingering on the female’s clothes, putting them in situations the male character’s wouldn’t be in, adding sexualized nuances that the male characters didn’t have.

I’d see stuff like this in other people’s fiction and think, why don’t writers just treat the female characters with the same set of dramatic standards? Why can’t we have a female character who doesn’t have to be captured or rescued by a man, whose life doesn’t center on her romantic interest in a male? How about some damn variety?

And then it hit me. I could stop griping and just put my money where my mouth was. If I wanted to make a female character who didn’t get marginalized for being female, why not just make my protagonist female?

Suddenly, it all clicked. Exit Randoval Sarvas, enter Story Kai Tann, so named because she makes her career as a “second-story girl”. And then I gave her brown skin instead of white. (Why? Well, why the hell not?  Where’s the inherent virtue in leaving all our fiction switches on the default settings?) 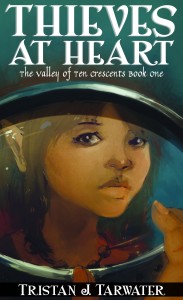 It wasn’t actually that easy, of course. The fantasy world in which the novel is set remains rather patriarchal, and I had neither the ambition nor the inclination to try to challenge that my first time out. A few details had to be changed, but Story was still every bit as in-charge as Randoval had been. And it made the story better. Where Randoval often came off as just another Han Solo wannabe, Story felt fresh to me. She challenged my perspective. And because I’d originally written her as a guy, she did things she probably wouldn’t have done if I had originally written her as a woman. In short, she taught me things.

To be honest, I questioned this decision. I had readers who loved and identified Randoval. I questioned whether this was born of some sort of male guilt, or a need to be (get ready for one of my least favorite phrases) politically correct. But I realized I had a lot of very good reasons for doing this:

It got me out of my comfort zone. Rewriting the protagonist from a female perspective forced me to confront a few assumptions about my own fiction. It broadened up my horizons a little. I’m not going to sit here and tell you I learned a Valuable Lesson About Life (cue The More You Know music), because that’s not what I mean. But it did shake up the ride a little, and I enjoyed it all the more for that.

Most of my readers are actually female. The ones I engage with, anyway. A couple weeks before I made this decision, Brianna Sheldon made a thread on Google+ about good, capable female protagonists in fantasy fiction, and maybe I’m just not finding the right books, but my short list was really short. Aside from Tristan Tarwater‘s protagonist in Thieves at Heart, I was hard-pressed to come up with much of anything in what I’d read recently. I know tons of awesome female writers and readers. Why not put someone in the book they can relate to? I don’t mean that to sound pandering — it just seems like basic marketing to me.

It just worked. Neither of the above reasons would have mattered if changing the gender of the main character had somehow diminished the narrative, or if it had seemed dishonest or smarmy. But it did work. I liked Randoval a lot, but I love Story, and I love what she did for the novel. It changed Orison from a book I thought was merely okay to one I’m really quite proud of. Even my editor said, rather emphatically, “Story could never be a man! Story as a man = boring. Story as a woman = awesome.” While I think the character would be just great either way, I’m glad she’s as enthusiastic about the change as I am.

I want to linger over that last part a bit, because in writing this, I realize it might come across like I made my protagonist female out of some desire to get Magic Feminism Cookies or whatever. That’s not the case. The dearth of good female characters in fantasy fiction has bothered me for decades. The next novel I wrote (now in a sorry state of abandonment) was written in part to address that lack.

I’m not trying to teach the world to sing, or anything like that, I’m just writing the kind of book I’d like to read myself. I don’t for one instant consider Orison to be some sort of Important Feminist Work; it most emphatically is not. It’s just a good fantasy yarn, which happens to have a female protagonist who doesn’t get by on her bare midriff and her sexuality. And if that makes my novel out of the ordinary somehow, well, all I can say is, it shouldn’t. I think it should be both common and unremarkable.

Finally, I think there is a greater writing lesson here, entirely divorced from gender. It’s about questioning your own assumptions about why your book is or isn’t working, and the value of breaking away from your routine. They say you should write fiction that scares you or challenges you, but I think that’s often more difficult than it looks, because we don’t always know what we should challenge or why. I feel fortunate that in the case of Orison, my desire to shake things up and my long-standing gripes with fantasy fiction intersected, and I was able to make something cool from the result.

Still, I do want to find a home for Randoval one day, because I think he’s a good guy and a good character. I hope someday to meet him again. But I’m really hope that when Orison drops, some of you will take a chance and meet Story. Because I like her a lot.