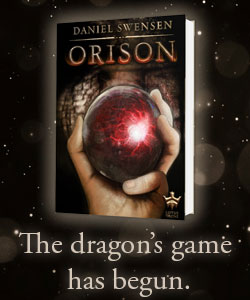 Hi! In case you haven’t heard, Orison’s release date is today! It’s available on Amazon and BN, as well as directly from the Nine Muse Press store, in ebook format. (Paperback coming soon!)

As you may have noticed, I haven’t been blogging much at Surly Muse lately. I was working hard on making Orison the best book I could make it, and that took all the time and energy I had to do so. Flash fiction, blogging, and even supporting other authors as much as I wished to all went by the wayside. But it’s over now, and in the breath between this book and the next, I’d like to tell you a few of the things I learned along the way.

Between June and now, I’ve felt much less prescriptive about writing advice, so take them as my experience, nothing more. Here are the lessons I learned from my first book:

You must sacrifice. For over a month, I did almost nothing but edit. I managed to keep up with my day job, but only barely. Friendships, social gatherings, games and TV all had to go. I needed every ounce of focus and drive to get this book out the door. The book ate my life. I looked back on the lackadaisical months and years I spent procrastinating and stalling on previous books and realized just how wrong I’d been doing it. This is a lot of work. That first draft you’re so proud of? Only the beginning. It’s like Frodo and company getting to that little house at Buckland and having a beer. You’ve still got Mordor to go, and the road is long and hard. So get moving.

Revisions can take all your energy. On the up side, I have never enjoyed such black and dreamless sleep as when I was in the throes of edits. I would shuffle to bed at the end of each day and collapse, my brain utterly exhausted. It made me grouchy and terse. Few noticed, because I’m always grouchy and terse, but that’s beside the point. People ask “hey, how are the edits coming along?” and I would grown and slam the phone handset back into the cradle, or would have if I still had a landline, or if people called me on the phone.

Planning and detail are key. Finishing Orison made me less of a pantser than ever before. Why? Because every detail needs to be consistent, every plot needs to come together, every foible and behavior of every character must add up. If they don’t, readers will notice, and the more planning you do ahead of time, the more intimately you know your characters and your plot, the less work you’ll have to do on the back end. No disrespect to anyone who can just improvise their way through a novel. But I’ll never write that way again.

You need people. Beta readers, reviewers, artists, and friends — you’ll need them. Remember that Lord of the Rings analogy I was making earlier? Yeah. Frodo wouldn’t have gotten far without Sam. You’ll need support, and advice, and caution, and praise, and someone to hold your hair while you throw up. Okay, maybe not so much that last one.

When you think you’re done, you’re not done. I sent the “final” draft of Orison to my publisher with the thought that it was really close to done! Nope. It was still so very far from done, and I didn’t even realize just how not-done it was until the third round of revisions. After a full rewrite. Revisions will bring to light new and exciting flaws you’d never noticed before! Thrill as you realize your plot has a huge hole! Marvel at the way your characters change without said change being evident to the readers! Dread fixing it! Know you can’t avoid it! Throw away passages you loved because they no longer work! No time for tears, it’s revisions!

“The best you can make it” and “the best it can be” are two different things. This was a tough one. More than once, I hit a dark patch in my revisions where I considered rewriting the entire book from scratch. (I also considered setting my computer on fire, but I’m fairly certain I wasn’t serious about that). There were still a few problems. The themes weren’t quite as resonant as I wanted. The supporting characters could use more development. The scope could be a bit bigger. More, and better, and this change and that change, and soon I was looking another rewrite in the eye, and I couldn’t face it. I realized it’s terrifyingly easy to just tweak and edit a book forever because you want it to be perfect, and it never will be.

When you hate your book, it’s finished. Before it was over, I all but loathed poor little Orison. I wanted it, and all the characters in it, to die. Mostly because I was tired. Tired of trying to perfect every moment and nuance, tired of trying to bring every emotion and note to the page. When I finally finished my revisions, I had a really solid book… but boy, was I ever sick of looking at it. That’s how I knew it was done. I still loved it, of course, but in the way you love a child who has been playing a game called How Loud Can I Scream for two months solid.

Marketing can bruise. Promoting your book can be rough. Getting attention is difficult. You worry about irritating people. And guess what, you’ll almost certainly irritate somebody. And if your release has taken a long time (like this one has) even the well-meaning jokes can start feeling a bit face-slappy. You just have to get through it. Thick skin, and all that. But remember to retreat and take some time out when you need to.

There is only the next work. People kept asking what I had planned for the big release day. The truth? I just want to work on the next book. Turns out sitting back and reflecting on my accomplishment (singular) isn’t really my style. I couldn’t make Orison perfect, but I think I did make it damn good, and now I’m excited to make the next book even better. I hope you’ll come with me on that journey. After all, Frodo wouldn’t have gotten far without Sam.

(P.S. my book bears little resemblance to Lord of the Rings. Just wanted to be clear about that.)