So you decided to participate in National Novel Writing Month this year. You’ve kicked around a few ideas and sworn to make an outline. Then things got busy. The kid got sick. You just had to find out if Elise was going to get kicked off Hell’s Kitchen. Your World of Warcraft raid group decided they were going to run Firelands without pants. Your muse packed up her stuff, gave you the finger, and knocked over your entire collection of Elvis commemorative plates on the way out the door. Or whatever. Long story short, you’ve burned your time like a Roman candle, Nanowrimo is a week away, and you’ve got nothing. Nothing! What do you do?

All is not lost. It might be a bit late in the game to meticulously plan ahead, but you can still throw something together in time for your inevitable November panic attack. It won’t be perfect, but you don’t want it to be perfect. Perfectionism runs contrary to the very spirit of Nanowrimo. Here, then, is a quick-and-dirty method for outlining that you can pull off in a week or less.

I call this the Hailstorm Approach, which is to say that it’s an extremely stripped-down variant of Randy Ingermanson’s Snowflake Method. (I had considered calling it the Half-Pants Approach, but that sounded kind of dirty.) If you want a proper, useful method of outlining a novel before you write, I highly recommend the Snowflake. But the Snowflake is far more thorough and time-consuming than this, and that’s time you probably don’t have with Nanowrimo only a week away.

If you’re experienced with outlining, then you probably have no need for this. But if you’re a seat-of-the-pants writer or a first-timer looking for a framework for your story, this method might help you get through Nanowrimo with your sanity intact. I broke these steps down into daily tasks, but there’s no rule saying you can’t do it all in one Herculean sitting if you’re that kind of maniac.

So here we go.

Before you even start, you have to know what your story’s about. Most likely, you already have this covered; if not, well, here’s your big chance. Don’t worry too much about specifics at this point. Just boil your story down to your “elevator pitch,” the single sentence that sums up the book you want to write. You should also pick the genre(s) for your book. If you want to write a crazy, genre-mashing masterpiece for Nanowrimo, that’s fine, but it’s best if you at least know which genres you’ll be defying from the outset.

2. Better Get a Bucket

Next, make a wishlist of all the stuff you want to write about. Nanowrimo transforms November into a demanding beast, and you may find motivation and inspiration at a premium. So just write down everything you want to put in your book, no matter how off-the-wall or unlikely it might seem. Aim for one simple criterion: if the thought of writing a particular element excites you, put it on the list. You’re under no obligation to include everything on this list when the time comes to write your draft, and you can save the elements you don’t use for a later project.

To keep your novel from meandering, impose a loose three-act structure for the novel. Again, don’t get really exacting about it at this point, just have a rough idea in mind. Ingermanson adds another layer onto this, called the “three-disaster” structure. These are basically three obstacles that you throw in front of your protagonists before the climax of the story:

Once you’ve figured these things out, you’ll have a skeletal framework for your story. This framework will almost certainly change over time and multiple drafts, so don’t sweat it too much. The goal here is not to create a rigid plan that you can’t deviate from — it’s to keep your contemporary political thriller from becoming a sci-fi epic about ninja chimps swordfighting on Mars (unless that’s your one-sentence summary, in which case, good work!)

If you’ve been writing for awhile, you’re probably intimately familiar with the many intricate character charts that detail every nuance of a character’s existence. Such a thorough level of detail is probably impractical given the pace and scope of Nanowrimo, so here’s a quick compromise: for each character, come up with a name, then a set of five to ten “aspects” that describe that character. These can be anything: physical descriptors, story goals, personality traits, quotes, character tropes, a list of their diseases… anything you think sums up the characters. Don’t worry about being consistent — just make a quick sketch of each major character.

Now that you’ve figured out your characters and their roles in the story, it’s time to start tying them together. Carve out some relationships: best friends, lovers, sworn enemies, backstabbing traitors, disapproving parental figures, whatever. If a sketch or a mind-map works better than a bulleted list, do that. Plotting out the major relationships and keeping them in front of you will lend your scenes clarity and drive, especially when characters are working at cross-purposes. Again, this is not a stone tablet to be slavishly devoted to — if you get to writing and you find something’s not working, jettison it without mercy.

At a certain point in the outlining process, the Snowflake Method recommends writing the entire story from the point of view of each character. This presumes that you’ve already written a summary of the story in its entirety, though, and since this method doesn’t include that step, I recommend a slightly different approach.

Write a couple of sentences or a short paragraph describing the story arc for each major character: where they begin, how they change, and where they end up. If you’ve outlined your characters and their relationships in the previous steps, this should be pretty easy pickings. Paint with a broad brush and don’t get hung up on details — there’s plenty of time for that later.

For the final step, break out a new text file or a spreadsheet and create a list of scenes for your novel, from beginning to end. Include the point-of-view character and a one-sentence summary of what happens in each scene. Again, this is not to be considered immutable law — just a low-level breakdown of the story.

Pick items generously from the wishlist you made above: include everything you find exciting and compelling. Try to add only scenes that move the story forward. One of the big advantages of outlining is that you cut way down on wasted scenes that go nowhere. They’ll probably still crop up during your draft, but there will be far fewer of them.

And that’s it. You now have a nice, messy framework for your Nanowrimo novel, with just enough detail to keep you going, while not detracting from the joy of the first-draft rush.

If by any chance you end up using this method, I’d love to hear about it. Criticisms, recommendations and refinements are equally welcome. Happy Nano-ing this November!

So today I’m going to talk about writing software. No, not Notepad or, God help us, Microsoft Word. I’m a FocusWriter man when it comes to raw text generation, thank you very much. I’m talking about keeping all those ideas, scraps of dialogue, abandoned outlines, inspirational pictures, and the other assorted objects that pile up in one’s digital writing drawer.

Almost all of the software I’m about to talk about has proven tremendously useful in organizing my writing. Problem is, learning software takes time, and organization can itself become an obstacle to writing — as can looking for shiny new tools to replace the familiar yet no-longer-so-shiny old tool.

Although these aren’t formal reviews as such, I do include a short list of pros and cons for each. I’m a big believer in using the tool that works best for you. So if you like a big folder full of Word files, go! Be that thing! But this is what’s worked for me.

Specifically designed for Randy Ingermanson’s Snowflake Method — a method I’m quite fond of, by the way — Snowflake Pro is a very slick tool. Ingermanson was a software engineer, so Snowflake Pro is intuitive, well-documented, and easy to use. I picked it up on a significant discount, and it got me through the last couple years of National Novel Writing Month. The most impressive thing about Snowflake Pro is how it helps assemble a killer proposal — that alone is nearly worth the price tag. 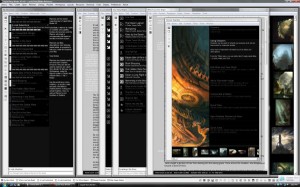 If Snowflake Pro is a finely honed tool for a specific purpose, Liquid Story Binder is a Swiss Army knife that just injected itself with horse steroids. Sleek, attractive, and distressingly flexible, LSB can take on crack-like qualities to writers obsessed with organization. LSB not only has planners, outlining tools, and storyboards, but image galleries and almost endless customization capabilities. For smaller projects, it’s like using a sledgehammer to swat a fly, but if you’re trying to wrangle a ton of content into a single place, LSB is a great tool. 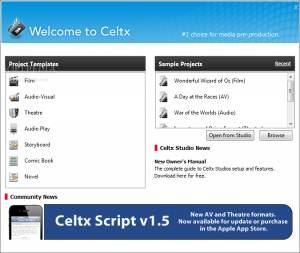 As far as I’m concerned, Celtx is simply the best screenwriting tool out there. It’s very full-featured for a free download, and the payware add-ons bring some very slick functionality to the software (especially the Writer’s Bundle, which is quite nice). I love Celtx for writing scripts, but find it’s not quite as well-suited to prose writing as, say, LSB. 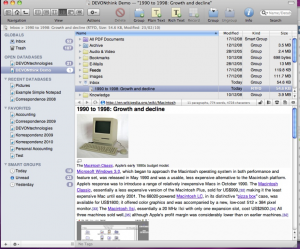 Back when I was a Mac user, I swore by DevonThink. It was my first experience with a powerful organizing tool, and I loved it infinitely. In fact, it was my search for a free and / or Linux-based alternative to DevonThink that led me to most of the tools on this list. I don’t use a Mac anymore, and I bowed out before Scrivener became popular, but I still think it’s a fine piece of software and worth a look if you use Apple products. 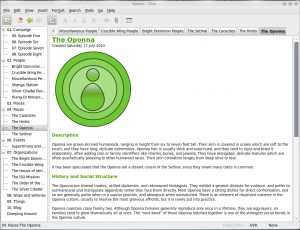 Zim is what I’m writing on right now. A “desktop wiki,” Zim organizes text into a series of files, which can be hyperlinked to one another, indexed and mapped. I like it mostly because it organizes everything into tidy “notebooks,” which I keep on Dropbox for easy and pain-free syncing. (I talk about said pain-free syncing at my gaming blog, but it works for any kind of writing project.)  Zim doesn’t really handle much beyond straight text, but sometimes the simplest tools are the best.

yWriter and Writer’s Cafe. I used both for awhile, but ultimately abandoned them in favor of one or more of the tools above.

So what about you? Any particular writing tools you swear by?