This Nanowrimo (and yeah, we’re just about done with talking about Nanowrimo for another year, in case you’re plumb tired of it yet), I saw a lot of people swearing by Write or Die on Twitter and in blogs. I’d given it a try once or twice, but it never really grabbed me until I combined it with the up-and-coming Twitter sensation that is #wordmongering (see below). Also, on a mostly-unrelated note intended to cash in on someone funnier than me, Write or Die always makes me think of Eddie Izzard’s indelible “Cake or Death” routine:

The concept behind Write or Die is this: You write X words in Y minutes (you choose both, you lucky devil). Once you start writing, you have to keep writing. If you stop for any reason, the screen slowly turns red, and a few moments later, you start hearing the most annoying sound in the world, which persists until you start writing again.

(There’s also a “kamikaze mode” in which the application starts deleting words if you stop writing for too long. No thanks. I can easily imagine one unexpected phone call turning a writing session into a ballad of shame and wasted lives.)

At first, I was pretty dubious about this concept — isn’t typing like a crazy person the enemy of coherent prose? Don’t I write sloppily enough without extra prompting? I certainly thought so, until I realized how well Write or Die clicked with my convictions about falling out of love with a first draft. 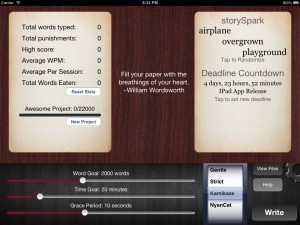 One of my biggest writing hurdles has always been overcoming perfectionism in my initial draft. I read a big radioactive pile of advice about how the first draft is just the beginning, and first drafts are crap, and so on. I never really believed it until I typed “The End” on a few books and realized just how much work those books needed — and, until Write or Die, I didn’t realize how much I tend to agonize over word choice, descriptive details, and other tiny hurdles that slow me down.

Certainly, there’s a time and place for careful word choice, but the first draft generally is not that time. Write or Die makes sure it’s not the time. Stare into space for too long searching for just the right power verb, and the Devil’s Interval will start sonically attacking your genitalia. Which is more motivational than you might think, and less risky than writing while having a small child use your groin as a punching bag.

So I dropped ten bucks on the application. It’s the best ten bucks I’ve spent on writing tools in the last year.

I put this concept to good use combining it with #wordmongering, a community-driven 30-minute word sprint founded by Monica Marie Vincent (@MonicaMarieV) and Alice M (@notveryalice). Thirty minutes to write as many words as possible, and to blazes with your (writing) inhibitions. Normally, I can churn out maybe a thousand words an hour if I’m feeling “on.” With this technique, I could crank out over 1500 words in thirty minutes. After a quick break to give my fingers a rest, I’d come back for more.

I went from a daily output of around 1,200 to over 5,000 combining Write or Die and #wordmongering. And if I don’t feel like socializing between writing sessions (which is frequently) I just skip the ‘mongering and stick to beating the clock.

Now tell me about you.

Finding a new writing process is always exciting, especially when it really works. So I’d love to hear about your process. What are your writing routines and habits? What really works for you? What doesn’t? Please feel free to leave me a comment below. I’d love to hear what you have to say.

(Also, a shout out to a few of my fellow wordmongerers: @JulieJordanScott, @Ava_Jae, @mohio73, @frbrown906, @GeorgeSirois, @digitalinkwell, @BPuttroff and anyone I may have missed! Interested in joining? Come on over! We have cake.)