Writing novels is hard, and requires vast, unbroken slabs of time. Four quiet hours is a resource that I can put to good use. Two slabs of time, each two hours long, might add up to the same four hours, but are not nearly as productive as an unbroken four. If I know that I am going to be interrupted, I can’t concentrate, and if I suspect that I might be interrupted, I can’t do anything at all. Likewise, several consecutive days with four-hour time-slabs in them give me a stretch of time in which I can write a decent book chapter, but the same number of hours spread out across a few weeks, with interruptions in between them, are nearly useless. – Neal Stephenson 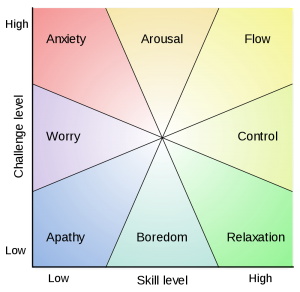 Whenever I read Neal Stephenson’s books (I’m making my way through REAMDE at the moment), I often find myself stopping and checking the dictionary, or Wikipedia, or both, to figure out what he’s talking about. Not that Stephenson is particularly difficult; he just happens to be as dense as Gibson and equally fond of charming-but-colossal infodumps: “The protagonist was playing a game of World of Warcraft. He sent his dwarf in to mine some gold. And now, an extensive historical overview of geology and the mining industry to lend this moment context.”

I appreciate Stephenson’s attention to detail. Having recently finished with a long run of indie novels, REAMDE has called attention to how much detail many other authors skip over for the sake of expediency. Not Stephenson. Before that gun on the mantlepiece gets fired, you can be damn sure you’ll know everything about its manufacture, capabilities, and mechanical quirks. (The only reason this works is because Stephenson rarely does it gratuitously. These trifling details serve the story.)

Anyway, while picking my way through REAMDE, I found myself interested in Stephenson’s mention of the “flow state,” a mental state of mind which one of the characters — a ridiculously profound fantasy author — must achieve in order to get his work done. Since being ridiculously prolific is something I’m in favor of, I decided to find out more about it… and now I feel kind of ridiculous that I’d never heard of it before.

The “flow experience” is defined by psychology professor Mihály Csíkszentmihályi by six factors:

1. intense and focused concentration on the present moment
2. merging of action and awareness
3. a loss of reflective self-consciousness
4. a sense of personal control over the situation or activity
5. a distortion of temporal experience, one’s subjective experience of time is altered
6. experience of the activity as intrinsically rewarding, also referred to as autotelic experience (Wikipedia)

All of these add up to a state that a lot of creative types think of as being “inspired” or “struck by the muse”:

These exceptional moments are what I have called “flow” experiences. The metaphor of flow is one that many people have used to describe the sense of effortless action they feel in moments that stand out as the best in their lives. Athletes refer to it as “being in the zone,” religious mystics as being in “ecstasy,” artists and musicians as “aesthetic rapture.” (Psychology Today)

In a curious bit of coincidence, my research into flow found this article, which linked the flow state to the “10,000 Hour Rule,” which I wrote about in yesterday’s blog post:

According to pioneering research by Anders Ericsson at Florida State University in Tallahassee, it normally takes 10,000 hours of practice to become expert in any discipline. Over that time, your brain knits together a wealth of new circuits that eventually allow you to execute the skill automatically, without consciously considering each action. Think of the way tennis champion Roger Federer, after years of training, can gracefully combine a complicated series of actions – keeping one eye on the ball and the other on his opponent, while he lines up his shot and then despatches a crippling backhand – all in one stunningly choreographed second. (New Scientist)

The New Scientist article goes on to talk about the possibility of dramatically shortening the time required to obtain such mastery through acquiring the “flow state” — although, as I said yesterday, I’m less interested in tracking hours than I am achieving greater creative output.

Does all this sound mind-numbingly clinical yet? Boy, I sure hope so. 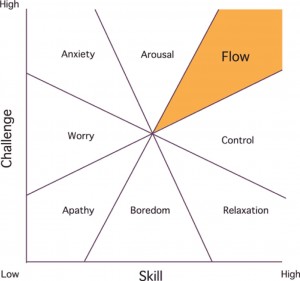 So in reading all this, I began thinking about my own obstacles when it comes to achieving the “flow state.” Here’s what I came up with.

1) Regular practice. The wealth on contradictory advice on how often and regularly one should write is well-heeled, so I won’t regurgitate it here. In my work, however, I find my gears rust up pretty fast. A few days without writing, and it’s a huge struggle to really find my groove. I started this blog in no small part to address that concern and compel myself to write daily no matter what. It’s turned out to be slightly wanting in terms of execution, but that’s how we learn from our mistakes, I guess.

2) Poor planning. This is basically the cause of 1). My least productive days are the ones where I get up, check my email or voice mail, and then basically react to things until all the time is gone. The days where I block out writing time and stick to the plan are far more productive. I’m sure there’s some clichéd adage about failing to plan being a plan to fail… oh, wait, that’s it.

3) Distractions. This is the big one. And now, an annoying autobiographical interlude!

Years ago, when I moved out on my own, my first place was a beaten-down old house in the middle of nowhere. There was no life within a quarter-mile in any direction. I lived on a blasted plain of dead grass and abandoned farm equipment. Now, of course, it’s all been developed into cracker-box condominiums, but back in the day, I was Robert E. Howard. It was just me and my little Apple II. There were long stretches of time when I didn’t even have a working phone.

I lived there for about three years, and in that time, churned out a huge body of work. All of it was garbage — I was young, stupid, and completely ignorant of proper storytelling craft — but I did nothing but write, in no small part because writing was all my little computer did. It had no games, no Internet access. It was a glorified typewriter.

Now, I’d love to say “and that’s the way it was and I liked it,” but in truth, I really love the information age. I love having oceans of data at my fingertips. I like not having to hoof it to the library to do research on some trifling factoid that’s holding up my story. I think the twenty-first century is awesome. But I have far more distractions now than I did then. Creating that kind of isolated environment doesn’t come easy anymore. It means forsaking not only the telephone and the doorbell, but email, Twitter, Facebook, G+, and the churning Sargasso of yummy information that beckons one like a siren onto the jagged shoals of farting around.

For me, finding the flow state means shutting out all distractions as much as possible. Some people can write on buses or in crowded coffee shops. Not me. I’d have to wear earphones and probably blinders. My attention is too easily diverted from the work. My best stuff comes when I slam down all the mental bulkhead doors and quarantine myself with my writing. Only then, after a lengthy struggle, does the flow state happen.

Of course, I’m not about to say that my experience is universal. I stopped writing in groups and at coffee shops because it doesn’t work for me. I think too much about what other people are writing. I worry about how much coffee I have left. I tune in on other people’s conversations. I can’t achieve that lovely fugue where the world recedes into fog and all that’s left is the page. I need to be alone, with nothing to pull me away, for the surly muse to emerge from her abattoir.

But that’s my experience. What’s yours? Can you write amidst distraction? How do you cope with it?