Author of the “gonzo metalhead science fantasy epic” series STARBREAKER, Matthew Graybosch is an author with a day job in a dream. In this week’s Surly Questions, he talks with us about his upcoming projects, digital sharecropping, and the tragic loss of his grenade launcher. His novel Without Bloodshed is out on Amazon now. Thanks for the interview, Matthew! 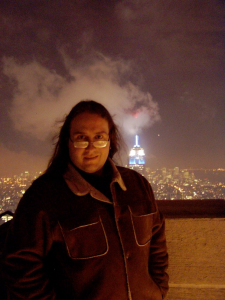 I can’t say I ever wanted to be a writer. What happened instead is more complicated, but not necessarily more interesting. I’ll try not to be too emo about my teenage existential crisis.

I was in college studying computer science because I had no clue about what I wanted to do with my life. I had pretty much given up on music, because I realized I’d never do for the viola what Eddie Van Halen did for the guitar. Religious life wasn’t for me, and my nearsightedness and problems with authority precluded a military career. Since I wasn’t trained for a skilled trade, and unwilling to spend my life bagging groceries, I stayed in school.

I was too poor and socially awkward to go out and get laid like all the cool kids were supposedly doing. I didn’t even have a car; I rode a bike to work and took the train to college, which gave me time to OD on genre fiction. After reading a particularly egregious fantasy novel, I decided that even a schmuck like me could do better.

So I set out to prove it. It seemed only natural that a bookworm should try his hand at writing, and it wasn’t like I had anything better to do with my life. Eighteen years later, I’ve got a science fantasy novel called Without Bloodshed on the shelves, a sequel called The Blackened Phoenix in progress, and a serial called Silent Clarion set to start next week. And if you’ve already decided this is too long, just wait. It just gets worse from here.

What, for you, is the most difficult part of being a writer?

Every time I finish writing a scene, I’m stuck with the suspicion that I’ve just dumped a few kilobytes of fresh, steaming crap onto my computer. I can’t be objective about my own work. I assume it’s utter shit, because I want to surpass Moorcock and Zelazny and Heinlein and Dumas and all the other novelists whose work I respect.

As pathetic as this sounds, I need external validation. I need someone else to read what I’ve written and tell me that I haven’t wasted my time despite any imperfections present in the work. Otherwise, I’m liable to waste years rewriting the same material over and over again. I didn’t finish a satisfactory draft of Starbreaker until 2009 because of my perfectionism. 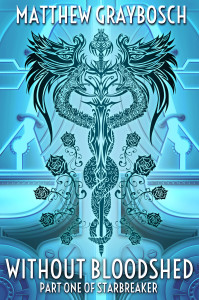 You describe Starbreaker as being heavily inspired by metal music. What music in particular informs the story, and how?

To start with, I stole the title from a Judas Priest song off the Sin After Sin album. Then there’s the series’ primary antagonist, Imaginos. His initial inspiration was a concept album of the same name by the Blue Oyster Cult. Like his BOC namesake, my Imaginos is an actor in history. He manipulates humanity for his own ends, however, rather than those of Les Invisibles. I also borrowed somewhat from a few of Iced Earth’s songs about their mascot, Set Abominae.

Nor is Imaginos the only character inspired by metal songs. Morgan Stormrider was inspired in part by Judas Priest’s “The Sentinel” (from Defenders of the Faith) and Iron Maiden’s “Flash of the Blade” (from Powerslave), as well as “Breaking the Silence” from Queensryche’s Operation: Mindcrime and “Psychotron” by Megadeth.

Naomi Bradleigh, believe it or not, was inspired by a Deep Purple song called “Knocking At Your Back Door.” Sweet Lucy was a dancer / but none of us would chance her / because she was a samurai.

What makes your book special to you?

I met my wife through Starbreaker. I’m not kidding. The gonzo metalhead science fantasy epic I started writing because I couldn’t get laid in college was how I met my wife.

We met on a Yahoo! forum for aspiring fantasy writers, and I suggested swapping stories. We ended up talking about more than stories, fell in love, and got married in 2004 after a four year long-distance relationship. We’ll have been married ten years as of Halloween 2014.

I laugh at people who complain about “long distance” relationships crossing state lines, because Catherine lived in bloody Australia while I lived on the East Coast of the United States.

I usually don’t get to write until my lunch break. I’ll either duck down to the cafeteria on the first floor of the building where I work and write for an hour, or drive down to a nearby pizzeria where I’m something of a regular. On a good day I’ll belt out at least 500 words.

After work, if I’m not too tired or my brain isn’t too fried from my day job’s demands, I’ll write some more after work and finish the scene I’m currently working on. Either that, or I might write a blog post. If I manage between 1500 and 3000 words a day, it’s been a good day. 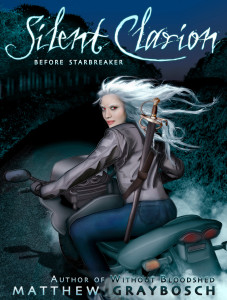 Your blog is titled A Day Job and a Dream. Can you tell us a little about both?

I’m a self-taught programmer. I think I’m good at it despite not being one of the obsessive types who would ignore the attentions of a goddess to belt out a few more lines of code. For me, software development isn’t a vocation from God. It’s a skilled trade, and a way to earn a living.

As for the dream, I think you’re already familiar with it. I want Starbreaker to be bigger than the Devil. I want a movie, a Broadway rock opera, manga adaptations, action figures, breakfast cereals, T-shirts, and flamethrowers. Though I think my wife will veto the flamethrower. She took away my grenade launcher soon after we got married, which makes the morning commute far less pleasant.

However, the blog is named after a series of New York Lottery advertisements. They all used the same slogan: “All you need is a dollar and a dream.” No doubt a poor grasp of probability is also useful, but the odds of my getting rich writing sci-fi aren’t that great either.

You recently “re-branded” your blog to tilt it in a more positive direction. Can you tell us more about what inspired that decision?

I was a nice kid until my first day of kindergarten, when I learned about bullying the hard way, and figured out that being nice didn’t pay. I became a heartless, cynical, irreligious asshole as a defense. But while being a vicious bastard is a reasonably successful defense mechanism against other assholes, I take it too far and tend to alienate people. I want to stop doing that. It isn’t good for business, and it might not be good for me personally, either.

I’m not going to say I want friends, because how can you want what you never really had? Nor will I admit to being lonely. However, I don’t want to lose book sales because I pushed people away.

I know a book is done when not only am I thoroughly sick of it, but so is my wife. Trust me, Ragnarok could come and go, and I could still find aspects of Without Bloodshed that could use improvement.

Maybe I have too many viewpoint characters. Maybe there’s still some wooden dialogue. Maybe I didn’t explain something as well as I could. Maybe I over-explained something else, and left too little to the reader’s imagination. It’s always something, but if I don’t draw a line and say, “Fuck it. I’m done.”, I’ll never move on to the next book.

You seem to have something of a conflicted relationship with social media and marketing yourself. How do you deal with that?

I think social media has made digital sharecroppers of its users. We create terabytes of content annually, but do not retain ownership of our work or profit from it. I deal with it by maintaining my own website and syndicating to corporate-owned social networks like Google+.

Nor am I particularly keen on marketing myself. I’m not particularly good at it. Nor is improvement a straightforward process due to cacophony of conflicting advice aimed at novelists seeing a wider audience. No doubt winning over readers is a process akin to making friends, but I was never much for making friends, either.

Despite my distaste for both social media and marketing myself, I cannot simply let my work speak for itself. Though I would rather it were otherwise, that way lies obscurity.

What’s the best writing advice you ever received?

“Don’t quit your day job.” It’s also the worst writing advice I’ve ever received, but more on that in a minute.

Having a day job allowed me to focus on writing for myself, without any concern whatsoever for marketability. Readers want boy wizards because Harry Potter and the Magical McGuffin is hot? Don’t care. Readers want soulful teenage vampires because Twilight sells like hotcakes? Not my problem, Jack.

I don’t have to chase trends to pay the bills. Instead, I can focus on my craft. With Starbreaker, I can take a shot at starting a new trend.

The downside is that I don’t get to have a “writing day” without cutting into my weekends. Instead, I have to steal what time I can for writing while also spending at least eight hours a day making somebody else richer in exchange for wages. I work at least two full-time jobs. Three, if you count being a halfway-decent husband.

If I had kids instead of cats, I’d be utterly screwed.

Tell us about your next projects. 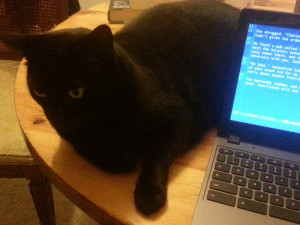 I’m juggling two right now. One’s a sequel to Without Bloodshed entitled The Blackened Phoenix. The other is the first of a new series called Before Starbreaker, and is called Silent Clarion.

The Blackened Phoenix is the more complex of the two, and will continue the multithreaded narrative begun in Without Bloodshed. Morgan Stormrider and his friends think they grasp the extent of Imaginos’ crimes and the Phoenix Society’s corruption, and need only seek evidence of the truth. But the truth is far stranger than they believed, and the evidence not so easily found.

Silent Clarion is a prequel to Starbreaker starring a twenty-year-old Naomi Bradleigh. She’s a year into her service as an Adversary, and her first anniversary with her lover John has come to a disastrous end. It’s a good time for a vacation, but she can’t leave well enough alone after learning of unexplained disappearances in a town called Clarion.

Anything else you’d like us to know about you?

I’m actually a big black cat named Virgil. I just hide behind the identity of one of my human slaves, and dictate to him because he has opposable thumbs. In fact, we cats have been using you humans for over five thousand years. Thanks for all the fish, by the way.