To kick off Surly Questions for 2012, it’s my privilege to bring you an interview with Michel Vaillancourt, author of The Sauder Diaries: By Any Other Name. Thanks for the terrific interview, Michel! 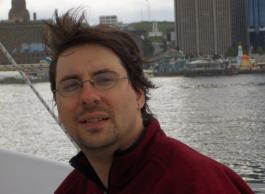 I knew I wanted to -write- around 12 – 14, which is when I was caught up with Anne MccAffery and Robert Heinlein.  I’ve had stories in my head ever since, which is why I was so heavily into table top role-playing games in my youth.  I still am, to a degree.

Want to be a -writer-?  Hmmm.  You know, I still don’t think I’ve made a conscious decision to “be a writer”.  I’m a storyteller at heart, and right now, instead of doing spoken word presentations, I’m writing them down and putting them out in eBooks.

Is writing The Big Calling In My Life, the way I know some writers feel it in theirs?  No.

Steampunk fascinates me on a few levels.  Something I heard Phil Foglio say at Steamcon was that “Steampunk fiction is about when technology can save humanity.  It isn’t the problem, it is the solution.”

I agree with that.  In my opinion, Steampunk fiction is inherently hopeful.  The right man (or woman) with the right perseverance and the right science at the right place could change the world for the better.  It is about people doing incredibly cool things at a point in time when when no one knew what the boundaries were and they seemed to be on the brink of revolutionizing the world.  Everything was within the realm of possibility; everything was within reach.  That’s pretty empowering.

3. What do you think sets the Sauder Diaries apart from other steampunk fantasy?

**chuckles** This is going to sound odd, but I really can’t comment, because I haven’t read much Steampunk fantasy/ fiction.

Having said that, I’ve tapped into something other than existing books for my creative process here.  I’m a fan of the overall Steampunk movement itself;  two trips to Steamcon in Seattle, spending time with the local Steampunk group in Halifax as I can, listening to the music, following folks on blogs and Twitter who are “living the scene” and such.

I guess what I have done is spent a lot of time researching the Steampunk community and tuning in on what themes seem to resonate within it by being part of the community.  This is a book for Steampunks, by a new member of the group. As opposed to being someone who wrote other stuff first and then that thought this might be a neat setting to try.

4. Any relation to Michel Vaillancourt, the Canadian show jumper born in Saint-Félix-de-Valois, Québec in 1954? Or is that just a coincidence?

Wow, you’ve done your research!  As far as I know, there is no direct relationship.  However, my family only really has its geneology traced as far as when we first arrived in what is now Quebec.  It’s possible that there is a connection on the France side of the trip.  If there is, I am unaware of it.

5. What songs are in your writing soundtrack?

My listening music tends to be based on my mood.  Sometimes, I just want quiet.  I either listen to Steampunk music from groups like Abney Park, Vernian Process and Vagabond Opera, or I listen to trance/ electronica from Tiesto or Armin Van Burren.  Other times, I listen to atmospherics like Brian Eno’s “Music For Airports” or “Music for Films”. 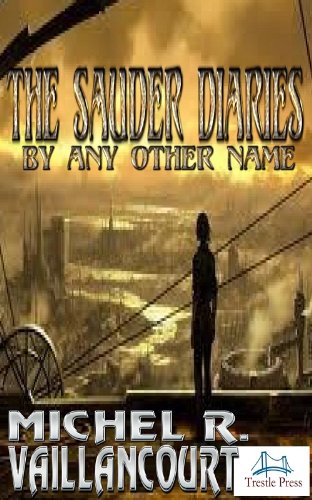 6. I’m told you have a strong military / technical / engineering background. What, if anything, has that brought to your writing?

Well, certainly, it has allowed me to add a level of detail that I might not otherwise have.  My father, for example, ran steam boiler systems on warships as an engineering officer… I spent a lot of nights as a kid sitting at the table watching him with a sliderule working on his training homework.  We’d talk about what he did and he’d explain to me how it all worked.

So, the part where Hans notes that it is possible for the metal of the boiler to catch fire and start burning unstoppably?  Yeah, that’s real.  Spray water onto it, and it burns -hotter-.  My dad has seen what’s left of boiler rooms where that has happened.

7. How big a role does reader feedback play in your writing process? What’s the biggest change you ever made because of something a reader said?

I have re-written entire chapters or moved chapters around based on reader feedback.  Originally, the “The Sauder Diaries – By Any Other Name” was released as episodic fiction, on Scribd, as each portion was written.  So as readers told me what they liked, I did more of that.

One of the most extreme examples is the scene at the lake between Hans and Annika.  That was re-written five times, based on my closed test reader group.

Another example is the good Doctor Koblinski. He was supposed to be essentially a one-scene character who was irrelevant to the long-term plot. His job was to be an authority figure (a medical doctor) that Hans would be able to believe in the face of what Captain Blackheart was telling him.

The fans, however, were enamored with him and insisted he had to stick around.  I had tremendous feedback at the release of Chapter One that everyone loved his wit and clear common-sense.  And again in Chapter two, when he got a bit more air time.  By Chapter 3, the Doctor was around to stay.

8. What’s the single best piece of writing advice you ever received?

“Shut up.  Don’t tell me about your story.  Go write it down.  If you tell me about it, you’ll be satisfied and you won’t need to do anything.”

9. What has been the most rewarding thing about connecting with other writers through social media and the Internet in general?

A serious amount of “we know you can” gets traded around.  When it feels like I’m on Mission:Impossible, someone I know gets a break, a shot of good news, a great review, or something… they Tweet it, Facebook it, Blog it, whatever… and I get a shot of “whoo-hoo” that helps keep me moving.

So, I try to give back into the “Can Do” pool whenever I am able.

10. Who are the most inspirational people in your life when it comes to your writing?

Well, when I tripped over the works of Anne McCaffery and Robert Heinlein in my ‘tween years, they literally changed my world and got me writing.  I’d say they are my literary heroes.

I’ve been very fortunate to have Chantal Boudreau as a mentor in the process of getting from “story” to “novel”.  She has been wonderfully encouraging as well as open about her own experiences as an author and a trail breaker.  She’s the one that first really got it through to me that The Sauder Diaries was a publishable work.  She’s been there for me to talk to and compare experiences with whenever I just didn’t have answers or direction.

Another person that really got me where I am now was my grade 10 English teacher.  She flatly refused to accept anything but my best effort in my essays and compositions.  That’s carried over in anything I do in writing.  She also gave me a love of Shakespeare;  there is a nod to that and to her in the second book in the works.

11. How close is the second book of the Sauder Diaries to completion?

Another funny question.  It depends how you count it… “The Sauder Diaries – A Bloodier Rose” is currently at about 78300 words, with about two more chapters to write.  Because of the way I write — I edit as I go, because I hate leaving junk behind me — its pretty close to good.

However, it still needs my internal team’s two edits/ revisions before I even show it to my publisher and their editors for a two-pass edit.  My preference would be for mid-May to hit the virtual shelves.

12. What’s next after Sauder Diaries?

Well, as I have said elsewhere, that is partially going to be dictated by the fans.  I figure that after “A Bloodier Rose”, the world of “The Sauder Diaries” has at least four more complete stories in it that bear telling, if the fans want to hear them.

I’m also currently tinkering with a short story tentatively titled “After Three Degrees and One Percent”.  I’ve also got a SF story I’d like to do called “Marshal Station – The Dustpilots of Mars”, and a swords-sorcery called “Revenant”, but both of those are a ways away.

All of that said, one of those quotes that has always stuck with me was by Canadian singer Corey Hart.  During an interview, he made a comment to the effect that if a singer doesn’t have anything to say, they should shut up.  Hence a decade gap between his last two albums.

I sort of feel the same way about my writing.  Once the third “Sauder Diaries” is out, we’ll see if I feel like I still have something to say.

1.  SAS survival manual for desert islands
2.  “Space Chronicles” by Neil Degrasse Tyson
3.  “The Harper Hall of Pern” compilation by Anne McAffery
4.  “Have Spacesuit, Will Travel” by Robert Heinlein
5.  A blank leather bound journal, like the ones my wife makes.  (I’d have to be able to write)