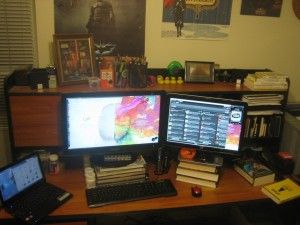 My desk. Yes, those are rubber ducks.

I love seeing people’s writing spaces. From the tidy and well-organized desk to the unruly pile of papers around an overstuffed chair, the writing space can be a great insight into the writer’s mind — and sometimes it’s just fun to see what other people stock their desks with.

But equally as important as the physical space is a writer’s digital space. Unless you write longhand (and more power to you if you do, really), you’re going to have a digital environment in which you work. It’s a bit rarer to get a glimpse of these environments — a desktop screenshot might not, by default, seem very exciting — but I believe that one’s digital space is at least as important as one’s desk or table.

And now, because you totally didn’t ask, here’s a look at mine!

I have a dual-monitor setup on my machine, which I once thought excessive, and now can barely live without. I hate trying to hunt through taskbars and buttons to find a particular program, and two monitors gives me way more room to breathe. I also run Ubuntu Linux, which means I have a lot more control over the look-and-feel of my workspace. Some people (especially Linux people, it seems) don’t believe aesthetics has any place in computing. I disagree. If you’re a writer, it’s likely you spend hours a day in your computing environment — why not make it an appealing one? 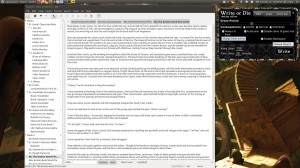 A terrifying glimpse into the world of the first draft.

Anyway. First and foremost, I have a separate login just for writing. (It’s called “writer.” Which I think you will agree is very imaginative.) I customized the menus to take out all the shortcuts to various games and distractions — but primarily, switching to the writer account puts me in the mood to write. It’s a mental signal to get prepared.

On the left monitor, I have my word processor(s) of choice. These days, I mostly use Zim and Write or Die. I use Write or Die to generate the raw text, which I paste into Zim for organizing. I like Zim because it constantly auto-saves to Dropbox, so I never have to worry about losing anything. Between Dropbox, my desktop, my laptop, and my netbook, I have three redundant backups, which is a big load off my mind.

Does this seem mildly neurotic yet? 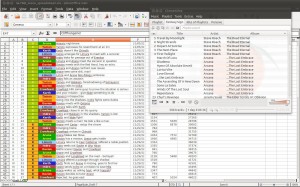 While it might seem overly specific, this approach works for me. I’ve honed it to perfection over the course of years, figuring out what helped my productivity, and what ended up hindering it. The ability to write in adverse conditions is still a valuable one, but if one has the luxury of a controllable digital space, why clutter it up with distractions?

So, do you have a particular “digital space” for your writing? If so, what’s in it?