Writer, poet, artist, journal fetishist, freelance cat detective. Tracy McCusker is all but one of these things. She is also the author of Letters from Nowhere. Thanks for the great interview, Tracy!

1. When did you know you wanted to write? 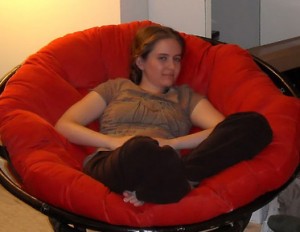 When I was in third grade, the teacher ran a contest for a couple lollipops and a good behavior star. Whoever could write a single scene with the most adjectives would win. They had to be different adjectives. I actually didn’t care about the lollipops. This was the grade after I’d been in timeout nearly every week for obstinate behavior. That good behavior star burned. I wanted to prove to this new teacher that yes, I was a good student–not the terror that Ms. Hata described.
On the day of the contest, every student was expected to stand up, say the number of adjectives they used, then read their passage. We all stood up in turn. Most people used five, six, or eight. The girl who wore nothing but overalls was pretty smug that she’d used sixteen. Then it was my turn. Sixty-six for a cozy little cottage scene. The kids bugged out as I read my very purple prose. I was pretty sure, then, that I wanted to be a writer. Because writers could make other people bug the fuck out.

Because at 11 years old, I didn’t have the squirrel-brain patience to write those epic fantasy novels about stranded airline passengers on their bizarre pseudo-reality island. Novels got me nowhere fast. I’d plunk the keyboard in frustration. I could tell what I was writing was shitty. But why? And how could I change that?

At the time, I couldn’t. So I sulked for a few weeks. Then started up my first poetry archive and began to make tiny poem-objects. It just stuck from there. I admired their brevity, their musicality. Hungered for their incisive wisdom. Even as I was a wordy bastard myself. Now that I (maybe) have the patience to tackle large projects, I am caught by the starkness of good poetry. It leaves me breathless.

How about three number one favorite poems?

Piers Plowman, by William Langland. It’s an allegorical dream poem from the 14th century about Conscience, Will the dreamer, and a cast of thousands trying to make the perfect society. And failing three times. It is crazy, all-over-the-place, the very anti-definition of a poem that’s in control of its own allegorical meaning. This poem was Langland’s life work. It’s the only thing he wrote, and he revised it up until his death. I love reading someone’s Life Work. You can feel the stakes it had for them.

Sunday Morning, by Wallace Stevens. It’s powerful meditation on divinity and the Christian imagination. The poem moves through metaphysical questions/complaints like water, each building a new spiritual dimension on the last. It has one of the most moving final stanzas I’ve read on a poem anywhere. I think everyone should read this.

Jim McMichael’s “Celery.” It is completely unlike the other two poems. It’s a simple thing, inspired by the clarity of haiku. You should read this one too. It’s short. Go ahead, I’ll wait.

4. Who are the most influential poets and authors in your life?

The ones who formed my tastes & style: Marie de France, Ezra Pound (his stubborn/snippiness as an editor), William Carlos Williams, William Maxwell. Off and on the Romantics and the Victorians are inspiring: Wordsworth, Tennyson and Rilke. A book called “Japanese Death Poems.” If I could be an old poet, I would like to be Pablo Neruda. He was so prolific in his final years. So clear of eye, and quick in verse.
Then there are the little-i influences, whose work fascinates me. The unnamed poets of the 12th & 13th century who are ridiculous, quirky, accomplished, and moving. Their namelessness is itself is a kind of mystique to me. Writers today have to build brands–but what about the writers who wrote and were never known, except by their work?

5. I know you’ve done prose in the past — any plans to return to it?

Yeah. I intend to return to prose for my next project, but It will be more of an occult reference/humor piece–not a novel. I don’t know if I’ll return to novels. Right now everything moving that I want to say can be done in the poetry format. My imagination tends to dream up small things that can be settled in the space of 20-50 lines. If a big idea announces itself, I may just come back to novels after all.

6. You draw in addition to writing — how have the two disciplines influenced each other?

Oh they are two amorous disciplines indeed. Now I can’t even talk about one without mentioning the other. My anecdotes about drafting a poem or a short story end with at least one, “well, you see, there’s a thumbnail stage, and a rough phase…then a clean line stage. THEN you–”

I used to be a one-drafter. Do everything in one fell swoop. But drawing broke me of that habit. It helped me see that you can create something big, complicated, and beautiful from very small objects like the 30-second thumbnail. In fact, if you want to create the right big, complicated object, you need to start with those quick thumbnails. Otherwise you’re 1500 words into an epic poem, and you realize that the Roman Empire told from a stick’s perspective might not be the grandiose & literary undertaking you originally thought it was at 2 am.

7. What’s the hardest part about being an artist?

The single hardest thing (aside from affording the costs of supplies) is that people expect art to be something easy to pick up (is there a web tutorial where I can learn drawing?) or something super-hard (oh my god, you can DRAW?! It’s like you walk on the moon without breathing apparatus!). In honesty, it is neither; like any craft, it takes a lot of dedicated time.

I carry around a small chip on my shoulder because I didn’t start early. I was inclined towards things like layout, typography, line and color at an early age, but I let all of that go in favor writing. I didn’t start to take art seriously until 2006, less than a year away from graduating from university with an English degree.

Now I feel like I am always playing catch-up. I can see the long road stretching out behind me–I can see my improvement from those very first unwieldy stick figures. But I can also see the long road ahead. There’s a cult of youth in the illustration/graphic design industry. So I get a bit flustered at industry magazines when the next superstar of 18 TOTALLY BLOWS AWAY EVERYTHING ELSE. Eeeh, industry hype I suppose is always a bit demoralizing.

8. Who are the most inspirational people in your life when it comes to writing / poetry / art?

Well, there’s this tumblr feed…maybe you’ve heard of it. I derive inspiration from the pictures, blog posts, titles, and poems that are shared with me. Something shared means my friends liked it enough (or were proud of it) to say, “hey, come look at this!” There are a few artists I follow daily: Skottie Young, Android Jones.

Then there are the people who are equivalent to a gut-punch of strong coffee. I can’t drink coffee thanks to a caffeine intolerance. So when my energy flags during the day, I have an inspiration ritual instead.

When I feel the mid-day burn, I think of my overly-productive, energetic friends new & old. Martin Francisco and Alejandro Komai. Martin is one of the best designers I’ve known. He could create anything from basically anything else. Whenever I’m stuck, or having a down day, I think of what he’d do. His inspiring creations (a prop-quality lightsaber handle) from wire, super-glue, paint and a bit of shaped plastic. And then, I just make something. Doesn’t have to look good. I know I’ll have time to shape it later. Alejandro is one of those can-do-anything-he-sets-his-mind-to people; his energy is super-infectious. When my writing projects start to burn me out, I imagine having a conversation with Alejandro. I give him excuses for not working on my project, and I see the faint head-tilt of disapproval that betrays his own thoughts.

Within minutes, I’m back on my feet, striving for that level of super-productivity.

9. What’s the meaning behind Letters from Nowhere?

Letters From Nowhere just seemed to fit as a title. William Morris’ News from Nowhere was always one of my favorite book titles. A nowhere that’s still a somewhere, even if only in your mind. The poems in LFN are a several series of poems that I wrote over the past ten years. One set from when I was heart-sick, traveling in England, trying to shake a long-time crush in favor of working partnership. Another from when I was living with my then-fiancé in Irvine, dreaming of a quiet domestic life after college that never materialized.

When I wrote these poems, I would imagine myself reading them to their addressee. Because I couldn’t express these feelings in person. I make jokes to deflect tension, use bombast and hyperbole with glee when I’m lighthearted. Being understated doesn’t come naturally. These poems are about holding back the words bubbling up from a little place, to people who may never read the letters meant for them.

10. Tell us about your upcoming book of poetry.

The upcoming book is a 180-degree shift from Letters. It’s a series of blackout poems cut out of the text of the Communist Manifesto. As non-personal as poetry can get. Yet I felt a great connection to Engels–his sighs over Marx’s death. There was a great friendship here, brought together by sympathy and a desire to make a utopia. Using just the words from the Manifesto (and some words carved from letters in a line), I try to chart different currents in the text, from horror at machinery’s toll on man, to the revolutionary spirit of working men. Also, there’s some sort-of-erotic-for-Victorians poetry thrown into the mix. Because isn’t everything ultimately about making–whether it is production of machines or people? The manuscript is nearly complete; I expect it to be out by the end of February.

11. So, your insane journal fetish. Why?

Why doesn’t everyone share this fetish? Uh, okay, I don’t have a good explanation for it. It’s more than just journals; it’s the writing paraphernalia. I am terribly fond of journals, writing pads, and pens. I do 70% of my writing longhand. Since I exhaust a journal before I exhaust a pen, I collect far more of the former. I also illustrate my journals. The current theory is that I should have been a 13th century monk.

12. In your opinion, how important is a measure of insanity to creativity?

Insanity goes very poorly with creativity. When you’re to the raving mad stage (who hasn’t had hysterical fits that stretch on for hours? High five!), you don’t get a lot of writing or thinking done. Same with the catatonia. There’s a happy middle, which I’ll call eccentricity, and that’s where ideas mash together in brilliant ways.

Still, if you haven’t been broken in some way in your life, how can you write about broken people? Nearly all of human creative output has been about broken people striving to be less broken, more complete. The Adventures Of Mr. Sane Jobbed With Good Benefits And No Marital Discord is an awfully dull series.

1. Harmonium by Wallace Stevens
2. The Sea and the Bells, Pablo Neruda
3. The Poems of the Gawain Poet (Sir Gawain & the Green Knight, Pearl)
4. A 500-page journal
5. Red hardcover Lord of the Rings hollowed out to hold pens, ink & converters