Tracy McCusker of Dusty Journal has kindly offered to illustrate a comic for the month of November, highlighting the joys and trials of National Novel Writing Month. Check back for more installments throughout November. And! If you’re looking for an illustrator for your Nano novel, check out Tracy’s portfolio of awesome illustration work. She does terrific work at a great rate, and I say that as a happy client. 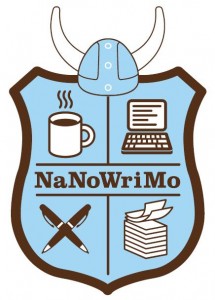 It’s that time again! Actually, it’s not, but you can smell it in the air: that smoky melange of burnout, hope and desperation that is National Novel Writing Month. Though I’m probably not participating this year, here are some links from last year to help you gird up for your journey through jacked-up word counts and mutual despair!

Wallpapers for 2013 won’t be done for a while, but come on, man, it’s September.

I’ll continue to post updates up through November. Are you ready for some football?!

Another National Novel Writing Month has come and gone. Maybe you pushed through and collected your intangible little badge. (I did. Nary a free drink nor swooning supermodel in sight so far. I have been lied to.) Maybe life got in your way and you got distracted. Maybe you stopped caring about your book. Maybe you just stopped feeling like writing. Maybe space chimps replaced your brains with Captain Crunch and you liked it. Life rolls on.

So let’s say you didn’t finish Nanowrimo this year. Should you feel bad about that?

Yeah, I think maybe you should.

About two-thirds of the way through this year’s Nano, I struggled a lot — as I do pretty much every year. (November really is a terrible month for a project like this, especially if you’re not used to daily output. Newcomers to Nanowrimo invariably discover this with keen astonishment, many of them waiting for that mythical “better month” when, presumably, life will stop happening.)

I was way behind. I disliked my story. Other time obligations intruded. I lost sleep. My fingers hurt. Walking Dead was on. And so forth.

A couple of friends tried to cheer me up. Hey, if you don’t make it, that’ll be okay, they said. You can just pick it up in December, champ. No big deal.

Only it was a big deal, and it took me a little while to parse out why attempts to comfort me and let me off the hook only aggravated me further. And then it hit me.

If you didn’t make Nanowrimo, and you’re unhappy about that, then it means you were serious. Or, at least, you wanted to be serious.

And if you fell short of your goal and didn’t feel the slightest bit bad, then maybe what you were doing didn’t mean much to you in the first place.

This is true of everything in life, not just writing. There’s nothing wrong with feeling bad about missing the mark you were shooting for — as long as you get back up and try again. Reams of cliched platitudes have been built on this fundamental principle.

Yes, Nanowrimo is a big, frantic communal goal, and falling short, especially when you see other people go racing past you, can hurt. But don’t lose sight of why it hurts — because, presumably, you really want to write.

Don’t let that disappointment turn into something bigger than it is. It’s not a sign you “don’t have what it takes.” It’s not a soul-crushing insight on your total lack of character. Don’t start playing Pink Floyd’s “Time” over and over while squinting into the middle distance and crying. I said stop it.

Now, maybe Nano didn’t work out for you and you feel just fine about it. That’s cool too. It can be a sign you’re not serious, but that’s not necessarily the case. Plenty of writers start out with Nanowrimo and reject it without blinking an eye. Not a thing wrong with that, as long as you replace it with a process that gets your ass in the chair and words on the page. Whatever works, as long as it works.

But if you find yourself feeling crushed by this year’s Nanowrimo — take your time. Get a little sad about it. Get mad at yourself if you want to. It’s okay. Work through it.

Cool. Now get back to writing. 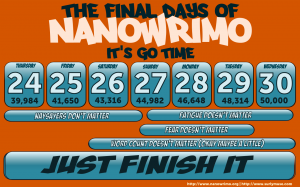 The final entry in the wallpaper series is a bit tardy, and I apologize for that. It should come as a surprise to no one who participates in Nanowrimo that time can… get away from you a little. As a result, there are a few days missing from the weekly wallpaper, but this one chronicles the final days. Many thanks to the people who have made kind comments about these wallpapers throughout the month — I hope it’s helped keep at least a few people motivated. Good luck finishing, if you haven’t already.

If I do these again next year, I’m definitely finishing them all by November 1st. 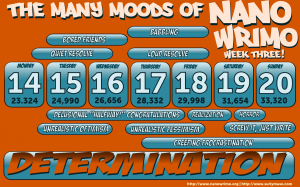 It’s that time again! Here’s a week of Nanowrimo word count and wallpapery goodness to get you through the next week. Hope you’re all staying frosty out there. Only sixteen days to the big finish!

Around this time in National Novel Writing Month, I start seeing a litany of familiar fears and complaints from first-time participants. My plot isn’t working. My story’s boring. I don’t know what to do next. I’ve hit a block and I can’t write another word. This is literally the worst thing I’ve written, quite possibly the worst thing anyone has ever written.

I’ve got bad news, guys. Those fears aren’t endemic to Nanowrimo. They are the tiny ankle-biting gremlins of the writing life, and they will be with you all your days. You might as well start naming and feeding the little bastards right now. You might placate them for a while, but they can never truly die.

I don’t know a single writer who hasn’t had moments of crippling doubt about their own work. Most writers I know have days where they feel like they’d just as soon hang it up. Every one of them has felt like a failure at one time or another, myself included. But the real writers keep writing, and if you want to be one, just repeat these three simple words: permission to suck. These words form the map that leads out of the caverns of despair and self-loathing. They are tranquilizer darts for the ankle goblins.

Although a lot of writers (and editors) seem to look down on it, I’ll always owe a lot to Nanowrimo, because it taught me one of the most valuable lessons in my writing life: there’s every chance your first draft is likely to be complete shit, and that’s okay. Seriously, it’s okay.

A lot of aspiring writers I know want to start at the top and work their way up. It’s natural. The desire to rattle off a brilliant, life-changing work in a couple of coffee-addled weekends and bask in the adoration of our peers is something most of us have probably entertained at one time or other. It’s an idea shot into our heads by movies and television, where a writer lights up a cigarette and creates something beautiful in the space of a pop-anthem montage. We buy into this and let it poison us. Some aspire to being great before they dare aspire to being decent. Some decide imaginary greatness is preferable to real mediocrity, and so they may never start at all, and they sure as hell never finish.

It took me years to figure this out, so I know that it may seem difficult. But your draft doesn’t have to be perfect. It doesn’t have to be great or even good. It has every chance of being born into the world an ugly, mewling, mutant thing, warty with flaws and riddled with issues. Accept it. Embrace it. Love it anyway, and let it grow into something more. Don’t toss it off a cliff Sparta-style because you took one look and judged it too weak to live.

If you find yourself struggling with your draft, despairing that it’s shit, wondering if you have what it takes to be a writer, the test is right there in front of you. Either give yourself permission to suck and finish what you started, or expect perfection the first time around and invite crushing failure. If you’re struggling with these doubts and you want to push past them, there’s really only one choice.

So go nuts. Hit the gas and punch through that plot hole like a semi running a roadblock. Inconsistencies? Who cares? One-dimensional characters? You can add dimension later. Loose ends? Tie them up on your way back through, because believe me, you will be back. The Plot Police aren’t going to show up to your house and start marking down your mistakes in the Book of Life. You can screw up. It’s okay. Just remember why you started this thing, and let that carry you through to the finish. 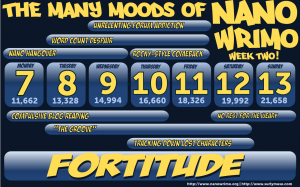 Break your writing into manageable chunks with a brand-new wallpaper for Week Two of Nanowrimo, covering the next seven days. Sorry for the overlapping day (Monday), but I realized too late that starting a week on a Tuesday… kind of awkward. Cheers, and I hope you like it. Also, if you haven’t already, please check out the many other wallpapers I have up for grabs. 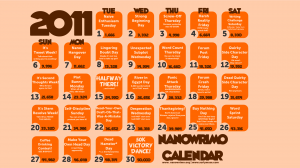 A reader requested that I include the Nanowrimo word count on the original wallpaper, so here it is. I don’t have time to do the rest of the color variants this way, but I might get to it before the month is out. This is also the last time I’ll mention the wallpaper until next week. So, check out the wallpaper page and once again, cheers and happy Nano-ing. 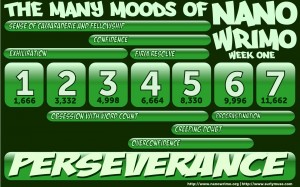 In honor of Nanowrimo’s big kickoff tomorrow (or today, for some of you), I made another Nanowrimo desktop wallpaper. This one just covers the first week, so there will be more like it coming. I don’t know how much true utility this one has, but it was fun to make anyway. Cheers. Oh, and feel free to add me as a writing buddy if you’re so inclined.